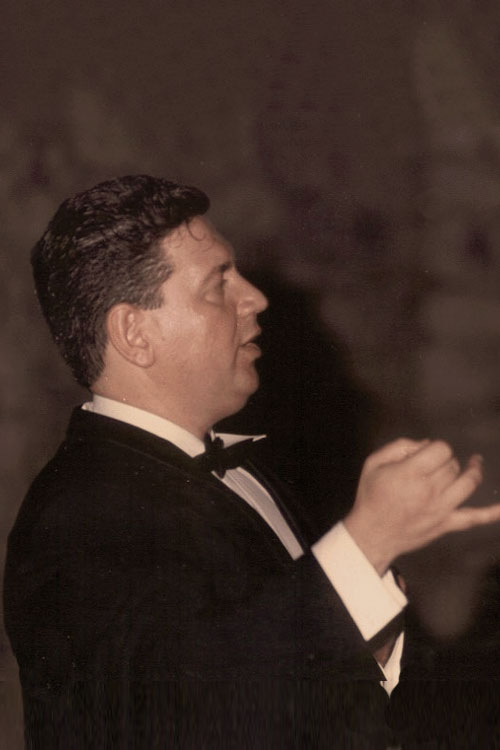 Ecumenicon is a work of value, without pretensions. It is extensive, original, a whole concept, not just an idea. The themes Ecumenism and Peace have never been as up-to-date and crucial as they are today. Therefore, the choice of topic and that of the texts supporting it is excellent.

On the other hand, the originality is also presented in the choice of the performers: choir of a combination of voices, a soloist, a recite, a group of percussionists that transform the work into something unique in its genre. However, the originality reaches even further and is perceived in the processing and variety of the rhythms applied and the modal character of harmony. It is a modern piece but it pleases the ear and is interesting to listen to.

I believe that both for the reason of the choice of topic and of its transfer to pentagram, Ecumenicon is a work of art worth of a splendid future, its presentation raised the curiosity and the approval of the audience.

We really hope that Yuri Chuguyev will provide us with more works as finely outlined and of an imagination as subtle as that of this present work.

In the history of art, there have always been cycles; as of music, a relatively young art, on the one side, we have seen periods of great simplicity and on the other side, ones bearing considerable characteristics of baroque: the two of these almost always alternating. The era of baroque was followed by the classic one, as a natural consequence of the saturation by complicated, contrapuntal works which gave way to a gallant style and a simple accompanying melody. Mozart has demonstrated that simplicity is not the enemy of quality. The 20th century and the beginning of the 21st century offer us a somewhat strange picture. Practically, from 1900 until our times, there has been more diversity of musical styles than from 1500 until 1900. Just a single composer like Stravinsky passed through various changes in style during his long life.

Nowadays, two opposite schools coexist (surely, there are much more but they all could be included into two main streams); one of them is totally atonal and baroque, even over elaborate, and the other one bears great transparency and represents a return to tonality, even to modality. In some occasions, this 2nd school does not exclude atonality but does this in a very different way. Poulenc said that he intended to write the less notes possible, this way attributing to him a return to simplicity. Minimalists of our age belong to this extreme and without trying to question quality; it seems that they are more favoured by the audience (to whom music is actually addressed) than those who reserve atonality without concessions.

In "ECUMENICON", Yuri Chuguyev appears to be near to the minimalists without being excessive. His world of sound is tonal and modal, simple and primitive which in its case should be considered as praise. His style is clear and direct; his command over percussions makes the rhythmic component in his works very important, and the variety of the metrics, of the meters of amalgam (those combining binary and ternary elements) add something attractive to his motives of simples appearances.

In "ECUMENICON", it is worth highlighting the inventiveness of Chuguyev in which cutting down on tools becomes a great virtue. He has learnt this from great masters like Mozart, Verdi or Britten, just to name the three greatest composers of the 18th, 18th and 20th centuries, respectively, who among many, excel in this. In this work, we find passages "to the chapel" of the choir, complete or in sections, instrumental passages (with just three percussionists), colourful solos, with a skilled usage of various instruments passing from melodic moments through lira, vibraphone, marimba and xylophone (instruments of a definite sound) to other purely rhythmic ones with all the variety of the disposable accessories of undetermined sound.

This duality of lyric moments combined with ones of great energy from which the above discussed primitivism emerges, is also characteristic of the choir. These latter moments use consecutive fourths and fifths.

"ECUMENICON" is a religious piece which easily could become to be listed in the repertoire of the beginning of the 21st century.

Flores de Malaga is a very original work that Yuri Chugúgev, percussionist of the Malaga Philharmonic Orchestra, has recorded with great care and depth.  It's not often one finds solo recordings for vibraphone and one can hear immediately that Yuri not only knows the vibraphone very well but manages to bring out all the possibilities of the instrument and at the same time not overdo the fast technical passages, which never becomes the vibraphone at the best of times.  The melodies in the work are beautiful, creating a relaxed and peaceful atmosphere and at the same time expertly harmonized. The work is further complimented by the high level of recording quality.